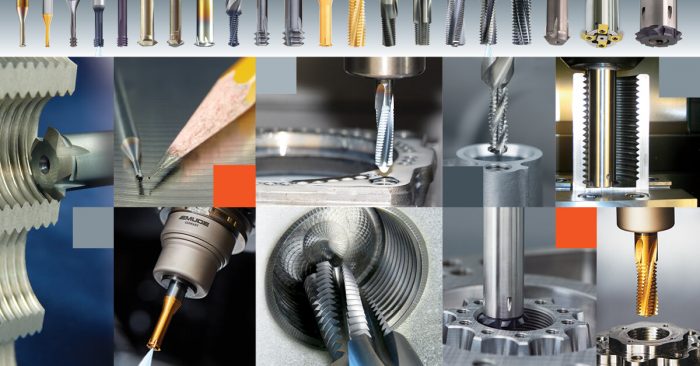 Holemaking is said to be the most common of all machining operations. Putting threads in those holes comes in a close second. For many decades, cut taps and then form taps were the only tools available for threading operations, but CNC programmers, machinists, and manufacturing engineers now have a more flexible and accurate way to generate internal threads. It’s called thread milling, a rotary machining operation that uses a milling cutter with a single V-shaped tooth or a series of such teeth to cut thread forms. Needless to say, EMUGE-FRANKEN USA thread mill product manager Marlon Blandon has plenty of advice about this underutilized and often misunderstood thread-making alternative.

Q: What’s the most common mistake you see people make when thread milling?

A: We often see shops using an ER collet chuck to hold thread mills, but these lack the rigidity needed to withstand the higher radial cutting forces encountered with any kind of milling operation, threading included. Hydraulic or even shrink-fit toolholders are good options, but a mechanical milling chuck such as our FPC tool holding system is the best bet. 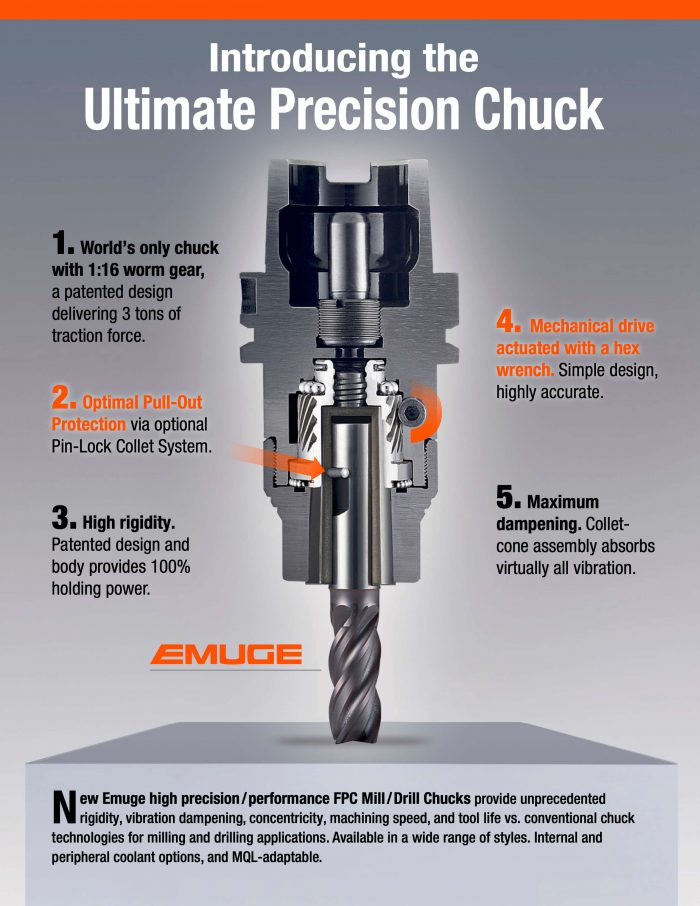 Q: What’s next on your list of thread milling dos and don’ts?

A:  As with most milling operations, it’s important to avoid chip re-cutting, making effective chip evacuation key to predictable processes. Therefore, we generally recommend staying away from neat oils and other high viscosity cutting fluids during thread milling. Instead, I suggest using a generous supply of water-based cutting fluid or even an air blast to get chips up and out of the hole.

Q: Any other problem areas?

A: Programming the wrong feedrate is another big one. For example, a customer called me the other day to ask why he kept breaking tools. Once he sent me the program, I saw that he was grossly overfeeding the cutter, and a hole that should have taken close to a minute to thread was being done in just a few seconds. That’s because he was calculating his feedrate based on the centerline of the programmed arc instead of the actual tool diameter, which is much larger. The obvious takeaway here is to ask for help if something doesn’t seem right. 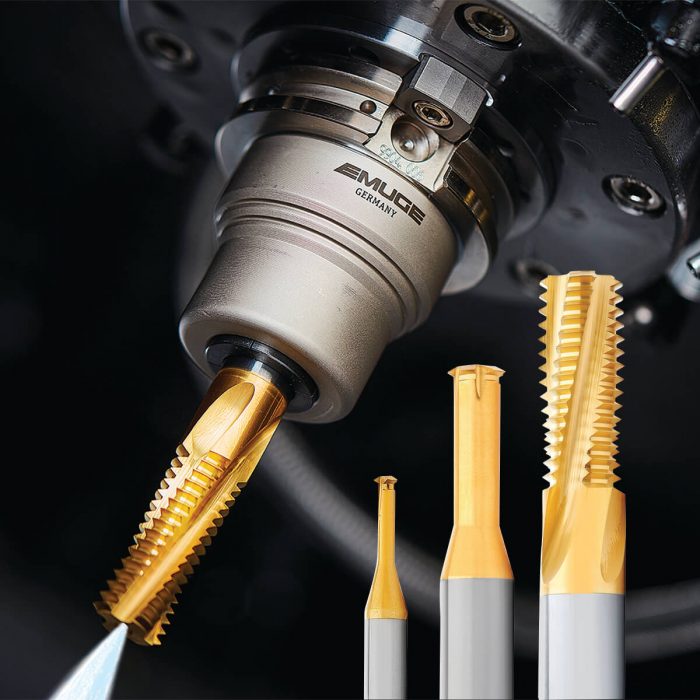 Q: What about single flute vs. multi-flute or full profile thread mills. From a productivity perspective, isn’t the latter of these the clear choice?

A: It really comes down to economy and versatility. Because you can cut any pitch thread with a single-flute thread mill, shops don’t have to stock as many tools. They can also just leave that tool set up in the magazine and call it up whenever they need to make some threads. That said, a multi-flute tool is much faster. Instead of making a couple of dozen passes with a single flute tool, one with the complete thread profile can produce any thread in two passes or less, geometry and material permitting. 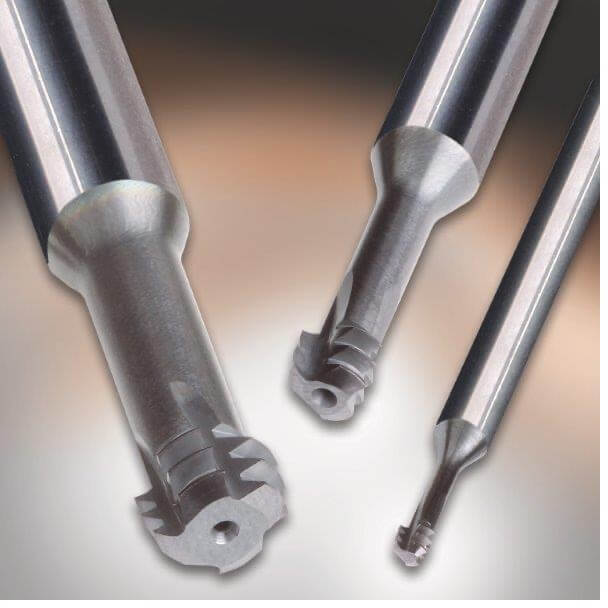 Emuge ZGF-S-Cut Thread Mills have multiple teeth, the first acting as a rougher and the next two teeth performing finishing. By dividing functions into three cutting edges, speeds and feeds can be increased, and threads can be produced in a single pass. A 10° left-hand helical flute form and chamfer geometry combine to optimize chip evacuation in the forward direction and add strength to the cutting teeth for enhanced tool life and process security. And for increased tool strength, Emuge ZGF-S-Cut Thread Mills have multiple flutes.

Q: What do you mean by that last comment, geometry and material permitting?

A: Two things, actually. The first is that most full milling section thread mills—ours included—are designed to cut thread depths to twice the tool diameter. Given the high cutting forces encountered with thread milling, that’s about all you can expect in terms of threading length for a full profile tool. In addition, materials such as Inconel and hardened steels might require an extra spring pass or two to compensate for tool deflection. On the other hand, single-flute tools support much deeper threads, although with a longer cycle time.

Q: Any difference between feeding up and feeding down when thread milling, meaning a G02 vs. G03 programmed tool movement?

A: You’re talking about conventional milling or climb milling. Somewhat surprisingly, there is a place for each. Climb milling almost always provides the best tool life—the chip goes from thick to thin and there’s very little rubbing. Conventional milling is just the opposite, with the flutes easing into the cut and then reaching full depth upon exit. So even though tool life won’t be as good, conventional is sometimes the preferred approach for unstable machining conditions or where you’re using an ER collet, as I mentioned earlier.

Q: EMUGE is known for its taps, and many veteran machinists were using them long before thread milling came along. Does the decision of whether to tap or thread mill come down to production volumes?

A: Tapping is definitely faster, so I think part quantity’s a factor, but it’s not the decisive factor. For instance, let’s say you have to make some 2″-8 threads in a manifold. A tap that size will be both hard to find and expensive, never mind the fact that very few machining centers will have enough torque to drive the tool. By comparison, a single point thread mill can cut these parts or any others in that size range, and even a light-duty machine will have no problem pushing it.

Q: Some suggest that thread milling is safer than tapping. How so?

A: There’s always the possibility of catastrophic tool breakage when tapping, but in my mind, chip length is a bigger problem. I like to use an extreme example of a 2″-4 ½ thread, which is common in shipyards. Do the math and you’ll find that a single turn of a tap this size produces a chip just over six inches long. Now multiply that by a thread two inches deep and you’re looking at chips nearly five feet in length. Granted, this isn’t as much of a concern with smaller threads, but even here, you’re dealing with long, stringy chips that are difficult to dispose of. Thread milling has none of that.

Q: Are there any other thread milling advantages you’d like to mention?

A: There are several. With thread mills, we can combine drilling and even chamfering operations in a single tool, as with our BGF Thriller. And I already mentioned a thread mill’s greater versatility, but since you can easily offset the tool for wear and deflection, you also have better size control. It’s much easier to get to the bottom of a blind hole with a thread mill, tool life is generally better, and like I said earlier, tough or hard materials are not a problem like they are when you tap. In fact, I spoke to a customer the other day who accidentally heat-treated some parts to 65 Rc before cutting the threads. Without a thread mill, those parts would have been scrap. Add to that some of the new tool coatings and geometries that we’ve introduced recently and you’ll find that, given the right toolholder and proper CNC programming techniques, thread milling is often the preferred choice for all but very high production quantities.

EMUGE BGF Thrillers offer the ability to drill, chamfer and thread in a single operation.

This website or its third-party tools process personal data (e.g. browsing data or IP addresses) and use cookies or other identifiers, which are necessary for its functioning and required to achieve the purposes illustrated in the cookie policy. To learn more, please refer to the cookie policy. In case of sale of your personal information, you may opt out by sending us an email via our Contact Us page. To find out more about the categories of personal information collected and the purposes for which such information will be used, please refer to our privacy policy. You accept the use of cookies or other identifiers by closing or dismissing this notice, by scrolling this page, by clicking a link or button or by continuing to browse otherwise.